Now that we are several months into the year, it is clear to see which home theater trends are leading the charge. Several of the top trends, like sound bars and voice control automation, have been on the rise for the last few years. However, some of the trends such as social media and hybrid theaters, are just emerging. Let’s start with the old and end with the new, shall we? 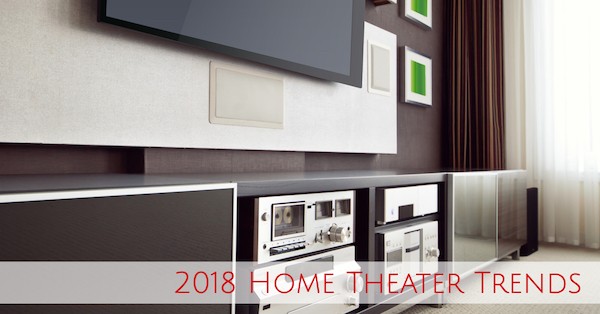 The evolution of sound bars over the last 5 years has been so fun to watch; there is no question as to why they have made the top trends list for several years now. Sound bars offer a sleek, compact design that can fit and fade into any space while packing an audio punch that does not disappoint.

New soundbars like the HT-ZF9 from Sony prove that sound bar technology is not done improving and will likely be a top trend for several more years.

With systems like Control4, your entire home theater can be controlled from one system. Opening a streaming service, turning up the volume, pausing a movie or dimming the lights can all happen from a designated control panel. Or, if reaching your smart remote is just too difficult, you can use voice commands. Try and find a leading home automation tool that doesn’t have voice control – we promise it would be a challenge!

Hybrid theater is a new term in the industry of home theaters (hence why it is in the new category). It encompasses a few different trends that all exist for the same reason. That reason essentially being that everyone wants a home theater! If you haven’t heard, we are in a golden age of television, with some of the most phenomenal and groundbreaking entertainment available via networks or streaming services. Television is so good that some folks spend an entire 70 degree day binge-watching the latest season release of their favorite show.

Simply put, people are watching television and they are watching A LOT of it. It only makes sense that everyone is looking to invest a little more money into their entertainment system to get the best picture, sound, lighting and overall comfort during their experience.

However, most people do not have the square footage to accommodate the kind of home theaters you see on MTV Cribs. So rather than cry about it, television enthusiasts have found ways to bring the luxuries of a traditional home theater into their living spaces.

Hybrid home theaters also appeal to every income level. Most folks have television but most folks don’t have $10-30K to designate towards a personal home theater. Luckily, there are low and mid-range options available all across the board so everyone can have a piece of home theater heaven.

We’ve touched on the trend of second screening in the past. The practice of using two devices at once (e.g. watching television while also scrolling your smartphone). The trend of social networking is a by-product of second-screening. In 2017, 72 percent of Twitter users said that social media played a role in their TV-viewing experience. Posting updates on fan pages or joining a group discussion via hashtags has become a normal part of television watching for many.

Like we said, we are in a golden age of television and people want to talk about it! There are a few honorable mentions that did not make our list, including virtual reality and multiple screens. Maybe if they keep it up, we will have them on the list next year!