If the television trends at CES 2018 were a long-time friend you hadn’t seen in a while, you’d instantly acknowledge how thin they are. You’d say, “Wow, you’ve really slimmed down. What are you doing?”. They’d respond by showing you their advanced yoga practice and effortlessly roll-up into a ball.

While enjoying great conversation over lunch, you’d be astounded at how crisp and clear their voice was. And just when you began feeling bad about yourself, you’d see with complete clarity every single wrinkle on their incredibly porous face.

Trust us, if you thought that introduction was over dramatic, you’re right.

That’s because the televisions unveiled at CES 2018 were nothing if not dramatic. Let’s step inside the theater of CES 2018 and look at our picks for most impressive TV unveilings. 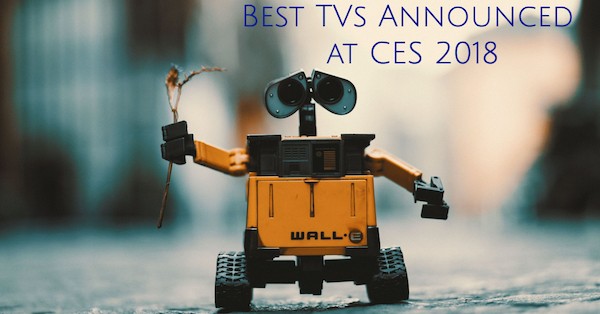 If you’ve ever been to a magic show or known anyone with a top hat and a bunny, you’ve seen someone pull a rabbit out of a hat. But have you ever seen a television appear out of a thin rectangular box with the click of a button? No? Well, prepare to be amazed because that is exactly what LG’s 4K Rollable TV does.

This OLED display isn’t your standard touch-your-toes type of flexible. This TV rolls up completely just like a poster would. Many would say that kind of flexibility really isn’t necessary, but we think the fact that it is possible, is amazing. What’s even more amazing is that the actual display of the television looks just as good as your standard 4K display. This OLED TV is so flexible it can even unroll to specific sizes that match whatever media you’re watching.

What’s better than a 77 inch TV? Why, one that’s 88 inches, of course! Not yet for sale but available for ogling is LG’s largest OLED display coming in at a whopping 88 inches. Just for good measure, LG decided to throw in an extra 8 and make this TV 8K. No, not its price, but its resolution.

As for price, you can bet this TV will be more than $8,000 when it’s available for purchase. This TV is not yet for sale and further specs have yet to be released.

The big, ugly and ineffective speakers on televisions have been under siege for the past few years. Not only does their sound quality pale in comparison to the impressive performance of the current market sound bars, but they are a bit of an eye sore and take up a good amount of space on televisions that are obsessed with being thinner.

Enter Crystal Sound. LG’s cutting-edge television that emits sound from its screen. Producing sound from the display allows the screen to be extra-thin, which is all the rage.

Don’t big TVs need love, too? This OLED television uses what they call “exciters” located behind the OLED panels that vibrate its crisp display producing a very directed and high-quality sound.

Who wants to stare at a boring wall when they could be staring at a television that is as big as a wall? Samsung’s appropriately-named unveiling of “The Wall” boasts 146 diagonal inches. It’s micro LED screen is being described as a modular screen that can be scaled up or down to fit your environment.

Gone are the days of staring at an actual wall; now we can stare at our gigantic TV on the wall.

Wait. Haven’t we done that before?

Much is still to be revealed for each of these televisions, but one thing is for sure, the future is here.