AirTV Player Streaming to your TV 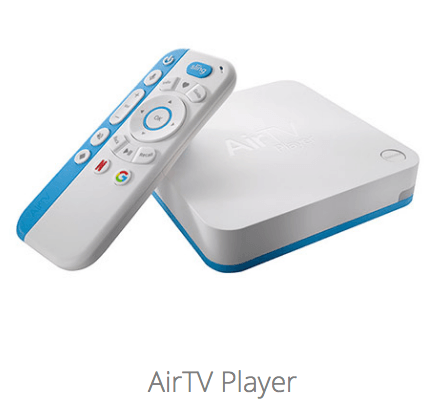 AirTV just might be our favorite thing to happen to television since Chromecast. If you are a television lover, you’re going to want to listen up! AirTV is the latest product from Dish Network; its launch was leaked last December and officially announced at this year’s CES.

AirTV is a $100 Android box and remote control that allows you to easily stream your favorite cable channels to your television via Dish Network’s SlingTV. SlingTV currently offers 3 channel packages that range from $20 – $40 dollars.

If you are one of the millions of Americans who have hesitated to cut ties with cable because you worry about missing sports, local news, award shows or primetime dramas, you’re in luck! When you purchase the AirTV box, you have the option to include an AirTV adapter that plugs into an HDMI port on your television and works with indoor or outdoor antenna. The adapter works with your antenna to allow streaming of OTA (Over The Air) channels, or simply put – FREE channels. Think ABC, NBC, CBS. The adapter is an extra $40 but it is a one-time fee and in our opinion, totally worth it. Installation for the AirTV box is simple, but the adapter does require some tech savviness. Dish will also install an antenna for you if needed, and one-time fees are included.

AirTV is also capable of streaming from Netflix, YouTube and the Google Play store, so no need to switch your input. Everything is controlled from the AirTV remote including: volume, pause, play, and access to all channels and apps. The remote also has a unique “find my remote” feature. If you misplace your remote, just hit the remote button on the AirTV box and the remote will light up and beep until you find it. If you aren’t convinced yet, let us tell you about the voice control. Yep, there is also voice control built in to the AirTV player if you’d rather not use the remote.

The biggest downside to joining the AirTV movement is the inability to record OTA channels. There is no DVR and from what we can tell it is not likely for a record feature to be added any time soon.

“Ditch cable and save a bundle.” That’s Dish’s tagline for switching to AirTV and we think it might be pretty accurate. It’s important to point out that you do not need a SlingTV subscription in order to use the AirTV player to stream from the apps and OTA channels.

Television and the way we consume it is an ever-changing market, so expect steady competition to come out of the woodworks and for Dish’s own products to evolve. But for the time being, Dish has made the first step in addressing the need for a single device that can control all of our favorite shows.