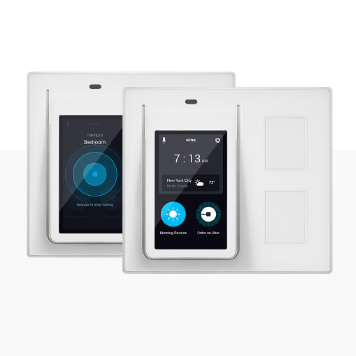 While it is arguable that voice control is the new UI (User Interface), there is still a large segment of the consumer population that prefers touch to talk. Many consumers also prefer visuals to audio, which is why touchscreens are not going anywhere anytime soon. In fact, they are getting bigger and better. Samsung recently launched a 20.5 inch LCD touchscreen smart hub on the door of a refrigerator (Family Hub Refrigerator). Reviews on the Family Hub Refrigerator are disappointing but not because of the touchscreen, which supports the theory that touchscreens are still highly valued in current tech trends.

If you are one of the many people out there who prefer to touch your technology rather than converse with it, there are several touchscreen smart hubs worth considering.

Touchscreen Smart Hubs for your Home

Wink Relay Smart Home Wall Controller is the first home wall controller designed exclusively for smart devices. The hub has built in humidity and temperature sensors to send alerts and/or communicate with your HVAC system if available. The Wink Relay also has a built-in microphone, which can be used as an intercom system if more than one device is used within the home. The company also has plans to add voice control capabilities through the microphone in the future.

Securifi Almond+ Long Range Touchscreen Wireless AC Gigabit Router leads the pack with its technology combining Wi-Fi and home automation. Aside from its ability to act as a hub for your connected home, it also functions as a range extender, router, AP or bridge and is compatible with any cable modem (DSL, Fiber, Cable, etc.). If that isn’t enough to prove its ability, it is also compatible with any wireless provider and can be used as a long-range Wi-Fi extender in conjunction with any router.

WooHoo. Yes, you read that right. WooHoo is the name of the latest touchscreen smart hub to be unveiled as part of a Kickstarter campaign out of Silicon Valley. We think if WooHoo can deliver on all of its promises, then it will be a game changer for home automation and smart hubs. WooHoo prides itself on its touchscreen capabilities in a market overrun by voice control, although WooHoo does also offer voice and facial recognition. The WooHoo group also promises the hub will be an affordable option for the average consumer looking to automate their home. You can pre-order a WooHoo today for an early bird price of $49.

The market of home automation is very much in its infancy. It will be interesting to see if voice control is here to stay or just a passing fad. We believe there will always be a place for touchscreens in technology but it is up to you the consumer to decide.