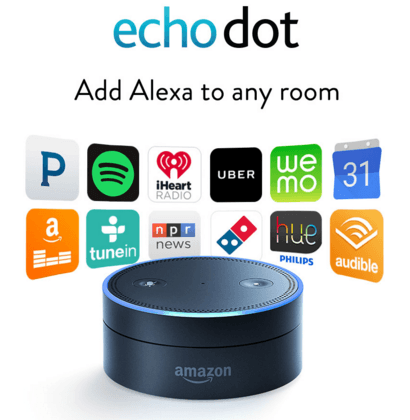 By the end of 2017, you can expect to see an increase in the average home’s IQ, thanks to the booming industry trend of home automation (a.k.a. smart homes). With so many corporate launches of new services, products and all-around better technology, we wanted to spend several weeks focusing on some of the biggest and most exciting home automation possibilities in a blog series dedicated to smart homes.

To kick off our series, we will be focusing on one gadget that will control them all: the Smart Hub. Key players in the Smart Hub trend are, of course, Amazon, Google and Samsung. Each has released their own smart hub onto the market; however, the market itself is still in its infancy. The companies are still trying to work out brand partnerships/integrations to create software that will allow seamless syncing between smart hub and smart devices (e.g. heating and cooling systems, appliances, security systems). Not only do these partnerships need to be identified but the software integration alone takes a considerable amount of time before it can be released for public use, which is a problem for consumers who want to get involved in the smart home trend but are confused about which hub will support which smart device.  Their confusion is for good reason since the companies themselves haven’t figured that out.

Amazon’s Alexa has been on the market for a while and is making significant strides in capabilities month to month. Alexa seems to be far ahead of the curve with their brand integrations with numerous integrations announced during last month’s CES. Alexa’s integration plans include: Ford, LG, ADT, Dish and Huawai, to name a few. If you are looking to join the smart home trend but want to start small, the Amazon Echo Dot is a great budget-friendly way to meet Alexa and see if you like her ($49.99 on Amazon.com).

If you already have quite a few smart products in your home and you would like to get them connected to a hub, then Samsung’s SmartThings ($99) would be a great option. It has the ability to connect to over 200 gadgets and gives you the ability to create different scenarios for all the gadgets in your home. For example, if you would like your front hall lights to turn on when you unlock the door, you can set that up. However, the syncing between the multiple systems is not by any means fluid and may take some patience to get set up just right for your needs.

Google Home ($129) gives you the ability to control your smart home devices as well as stream music. Those of us who use Chromecast can also control that through Google Home.  However, the selling point of Google Home is that it is fully integrated with Google Assistant, meaning that you can “Google” anything through voice control.  So far Google Home is the only smart hub program that offers an unlimited search function.

If you don’t currently have a smart hub in your home, there’s a good chance you will by the end of 2017. We will continue to see new integrations between brands announced throughout the year, which will hopefully help us all make more informed decisions about which hub will be the right hub for our homes.