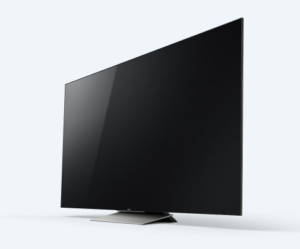 For some consumers, a television is a television; a means to an end. But for others, television sets are a thing of beauty, combining science and art into an incredible piece of tech. If you’re the second type of television connoisseur, Sony has created the ultimate media machine with the new XBR-X930D.

The Sony XBR-X930D is a 4K HDR LED television powered with Android TV. Although it’s more expensive than other types of 4K HDR LED sets, it’s backed by the Sony brand, known for exceptional quality and innovation, and has another stand-out feature: a super-slim design that brings elegance to the home theater setup.

The XBR-X930D is as wide as a Starburst, but the slim design doesn’t lead to loss of picture quality thanks to Sony’s Slim Backlight Drive, two layers of light guide plates that allow for local dimming control. With the XBR-X930D, you won’t have to sacrifice sound quality for a slim design. Sony engineered the set with smart cable management, so wires and cords stay out of view. The set can be mounted on the wall like a picture frame, so the picture — not the setup — is the center of attention.

In addition to the Slim Backlight Drive technology, the XBR-X930D boasts Sony’s X1 4K processor, which works overtime to process and adjust your picture for optimal resolution, brightness, and color. The X1 processor scales standard resolution programming to make it more like 4K.  Although 4K technology hasn’t caught up to mainstream media, the XBR-X930D brings 4K programming to your fingertips with pre-installed apps like the Amazon Video app, which offers a variety of 4K programming, the Sony Ultra app, offering paid 4K programming, and the 4K-supported YouTube app.

If you’re searching for a set that’s a beautiful combination of sleek design and awe-inspiring picture quality, look no further than the Sony XBR-X930D.