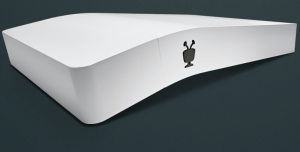 Almost every major (and minor) electronics company has launched products to share and watch streaming media, including AppleTV, Google Chromecast, Roku TV, and LG, just to name a few. The latest entry in the streaming media arena is TiVo, a pioneer in DVR technology, who released the latest addition to the Series 6 player lineup called TiVo BOLT.

TiVo’s sleek new device is minimalistic in design. Instead of hardware buttons on the front, the TiVo BOLT has integrated lights, giving the device an incredibly modern feel. The TiVo BOLT is designed with a gentle curve that not only gives it a fresh look, but also helps distribute heat from the device. The improvements continue “under the hood”, with a CPU that’s 3 and a half times faster and with 3 times the memory as the previous version of TiVo’s DVR box.

One of the most exciting advances in TiVo technology is the newly added support for 4K video. Although 4K programming is still in its infancy, the addition of 4K support in the newest TiVo box means you won’t need to upgrade once 4K hits the mainstream market – a benefit for budget-conscious consumers. TiVo has two 4K-ready applications at launch: Netflix and YouTube. TiVo also has a variety of other “instant applications” – with a 53% decrease in load time from the previous TiVo box —  like Amazon, Spotify, Vudu, AOL On Demand, MLB.tv and more. (Although if you’re a Hulu fan, you’ll have to wait until the company transitions its platform to one that’s compatible with TiVo’s.)

TiVo’s BOLT is a great way to combine DVR technology with streaming, and has features for any kind of television fan. New additions to the DVR portion of the device include QuickMode, which increases the speed of your programming by 30% with pitch-corrected audio so you can watch sports or news in a hurry, and SkipMode, which lets you skip commercials completely with a touch of a button (although this feature is currently only available for primetime programming on 20 popular channels.)