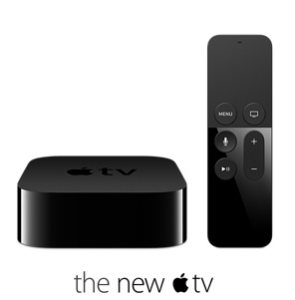 Move over, pumpkin spice. Fall is becoming “Apple Everything” season – Apple electronics, that is.

The recent Apple media event “Hey Siri” in San Francisco in early September brought news of the 9th generation of iPhones, the iPhone 6s, as well as a plethora of new gadgets for Apple fanatics across the globe. Home entertainment fans will no doubt be most excited about the newest Apple TV, the fourth iteration of the popular set-top box, which improves in form and function from the device’s previous generations.

If you rely on Siri to give you directions and help you call your friends, you’re in luck: Siri has been integrated into Apple TV 4th Generation substantially. The device has universal search capabilities, which means you can search the full range of entertainment apps (iTunes, Netflix, Hulu, HBO and Showtime) to find exactly what you’re looking for. The sleek new Apple TV 4th Generation remote has two microphones to help Siri pick up your voice commands, and a glass-top surface that functions like an iOS device; scrolling, tapping and swiping on the surface controls on your screen. According to Apple, the remote is designed to feel “fluid and precise”, allowing users to access features without looking at the buttons.

Are these new upgrades a game-changer for set-top boxes?