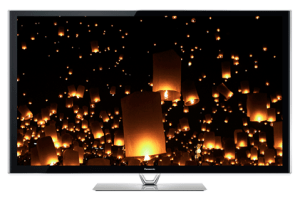 There are thousands of television sets on the market, from LCDs to curved 4K Ultra HD screens. As you’re shopping for a new television screen for your home theater system (or adding one to your holiday wish list), add another to the list: the Panasonic 3D Plasma HDTV.

The Panasonic TC-P65VT60 3D Plasma HDTV will bring a whole new dimension – literally – to your sports, movie, and television watching and gaming. Launched in the fall, the TC-P65VT60 3D Plasma HDTV – known in the industry as the VT60 – brings 3D viewing to the masses at a more affordable price than the flagship Panasonic 3D screen (the ZT60 series.) The set has 1080p Full HD Resolution and Full HD 3D, and comes with Active Shutter Eyewear that’s exclusive to the brand. This allows viewers to see the 1080p resolution with each eye, giving the view more realism and depth.

The screen has nearly identical performance to the first generation, but with a few minor differences that may make this product a more feasible alternative for the typical consumer. For starters, the Panasonic VT60 is available in a 55-inch size (the flagship ZT60 comes in 60- and 65-inch versions only.) This may be the most substantial difference in the two versions of the television set. Other additions include a built-in camera for video calling, and messaging via smart TV apps. As for performance, the VT60’s quality matches up with more expensive versions with amazing resolution, vivid colors and deep blacks.

The Panasonic TC-P65VT60 3D Plasma HDTV retails for $3,000 and can be found at retailers nationwide.