Where would the world of tech be without Google? One of the leaders in everything from search to music, Google is tied intimately with every type of entertainment. In 2010, the company threw its hat into the television ring with the introduction of Google TV, an operating system built in to certain brands of smart television sets that built upon Google’s apps and search.

Google is now streamlining their Google TV brand to make it more accessible to consumers. The company recently announced Chromecast, a USB-sized device that fits into the HDMI port of almost any HDTV or receiver, turning the television consumers already have into an entertainment hub (presented, of course, by Google.) For entertainment lovers who are ready to make a television “smart” without dropping a great deal of cash, Chromecast is a great solution. 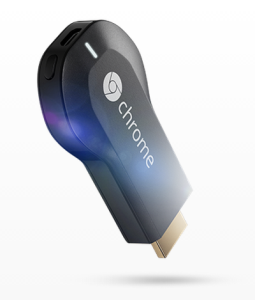 When the 2-inch Chromecast device is connected to the HDTV or receiver (as well as the included USB power cable), it connects to the consumer’s home wireless network, giving them access to YouTube, Netflix, Google’s Chrome browser and Google Play (home to thousands of movies, TV series and music.) Despite the size and cost, the device can deliver up to 1080p video resolution. As an added entertainment bonus, Chromecast comes with three free months of Netflix for new and existing subscribers.

One of the most innovative features of Chromecast is the control device – or lack of one. Unlike other set-top boxes that come equipped with a remote or wireless keyboard, Chromecast can be controlled with an existing laptop, smartphone or tablet. The device will be compatible with both Android and iOS devices, Chrome for Windows and Mac, and Chromebooks. Users can browse for TV shows, control playback, adjust volume and even browse the internet using familiar devices.

Google Chromecast is a great way to enhance your home theater system without spending a ton of money on new equipment. Consumers can preorder Chromecast from Google Play and Best Buy for $35.