A decade or two ago, technology experts promised homeowners of the future a fully integrated smart home. Tech fans could have one source to control everything, from lights to heating and air conditioning to home theater and audio. For this week’s Charlotte, NC featured install, the future is now.

Our client wanted to control various elements of his home through an easy-to-use interface from any room. The living room and master bedroom were already packed with great multimedia home theater equipment. In the living room, the client could relax with a 60” LED Samsung TV, Samsung Blu-Ray player and Marantz AV Receiver (model SR-5007.) This great equipment was paired with Episode 700 Series in-ceiling speakers, giving them a 5.1 surround sound. The master bedroom included a 50” LED Samsung TV, a Samsung Blu-Ray player and distributed audio.

In addition to connecting the clients home theater equipment to one remote, our goal was to include lights, the intercom, surveillance cameras and other home comfort and safety elements into the smart home system. The client identified several “living” areas that were regularly used, including the master bedroom, kitchen, basement and living room.

First, we installed three 9” Crestron Isis™ touch screens in three separate rooms of this Charlotte home: the master bedroom, the kitchen and the basement. The Isys™ touch screen has bold colored graphics, a drag-and-drop interface for easy room programming, customizable themes for each user, and desktop widgets like an animated clock, calendar, weather and news apps. The easy flush-mount installation makes this touch screen part of the home’s architecture, and high-speed Ethernet (standard on the Isys™) keeps our client connected. The client can control 12 zones of distributed audio, 100 light dimmers, a built-in intercom, three thermostats and can view four surveillance cameras from each touch screen.

For control on-the-go, we installed the Crestron Isys® 2.8” handheld WiFi Touch Screen remotes. These remotes have high performance and customizability. The remote has an ergonomic shape, and the large buttons make controlling home theater and home automation easy and fun. The Isys® WiFi Touch Screen remote lets our client control air, adjust lights and get metadata for the music playing through his sound system in the palm of his hand. The touch screens also include a built-in intercom that has a 50 feet omnidirectional coverage indoors. These wireless remotes were installed in the master bath, master bedroom and living room to control the local AV, lighting, HVAC and audio. 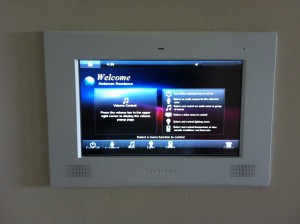 Our client was thrilled with the streamlined look and function of our installation. We can easily say he’s enjoying the “future” of home automation right now.