AV Receivers 101: Everything you need to know before buying

Let’s talk AV Receivers. They may not catch your eye like a sleek set of speakers will, but without an AV receiver, those speakers just don’t live up to their potential.


Who needs an AV receiver? 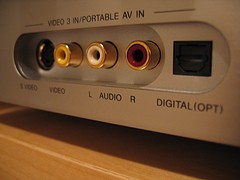 If you are outfitting your home theater with a 5.1 or greater surround system, whether purchased individually or as a speaker package, you also need to buy an AV receiver.

Okay, so I need one, but I still don’t know what it is.

An AV receiver provides inputs and outputs for all of your audio equipment, like the sound for your television and any stereo equipment. It also has video inputs for DVD players, satellite and cable receivers, HDTV receivers, digital video recorders, game consoles, and more.

When you plug all of that equipment into an AV receiver it acts kind of like a symphony conductor, helping to switch between your audio and video components, decode DVD surround sound formats, and power your loudspeakers.

How much will I spend?

AV receivers range from around $500 all the way up to $3,000 or more. The average purchase falls into the $800 range. The more you spend, the more features you get.

The highest-end models provide multi-room functionality, so you can have sound in several rooms at once. Some models even allow you to listen to different things in different rooms, all powered by the same system. For example, you can blast opera in the kitchen, while your kids watch a DVD in the media room.

What’s the one feature I must have?

The features you choose really depend on what you want to achieve with your system. Start by guaranteeing that you have a full-bandwidth power rating (20 Hz to 20 kHz). After that, consider how many components you want to plug in, and allow for any additional components you may add in the future.

On the low end, you’ll get 5.1 surround compatibility, and possibly up to 6.1 compatibility. As you move to mid-range units, you’ll start getting between four and six HDMI inputs, built-in networking functionality, analog video upconversion, and 3D compatibility.

Some newer models offer AirPlay compatibility, so you can stream music from your iPhone, iPad or iTouch directly to the receiver. AirPlay also offers networked capabilities, allowing you to take advantage of radio services and internet music sites like Pandora, MOG, Internet Radio, and more.

Does the AV Receiver have to match my speakers?

The speakers and the AV receiver should also match the size of your room. When building your overall package, remember that a big room requires big power. Make sure you have enough amplification to fill your room.