CES 2012 (formerly the Consumer Electronics Show) in Las Vegas wrapped up last week. Over 140,000 attendees got to check out over 20,000 new gadgets. And the the big news in home theater this year? One word: Smart. 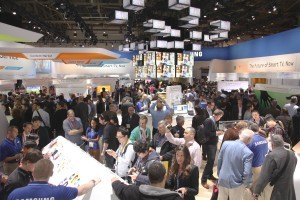 The electronics in our homes are getting more connected and more intelligent. According to IEEE Associate Member Oleg Logvinov, 2012 is going to be the year of home networking technologies. He says that greater networking capability will allow consumers to use their “[electronic] devices for a holistic experience, such as using a cell phone to activate the TV.”

Dr. Henry Samuels, Chief Technology Officer at Broadcom Corporation agrees, saying that the theme of CES 2012 – across all 3000 vendors and the products they brought to the show – was connectivity. Users are looking for seamless connection for all of their devices.

This connectivity will lead to TVs that can run gaming applications, and connect to movie streaming services. Consumers will be able to download a movie with their phone and display it on their television with one click. One manufacturer has even introduced a TV with natural language processing and speech recognition technology.

Surprisingly, 3D is not the biggest trend in television right now. Experts expect 3D to continue to improve, including more content and better glasses, and predict that in two to three years 3D technology will be more mainstream.

At this year’s show, however, emphasis was on display. A PCWorld article, CES 2012: 5 Trends To Watch, says that Organic Light Emitting Diode (OLED) TVs are the thing to keep your eye on. These TVs promise “more vivid colors, faster response times, and smaller device footprints compared to LCD/LED TVs.” One manufacture claims that their new OLED will offer a response time of less than 0.0001 milliseconds (the average LCD response time is between 5 and 2 milliseconds).

Another new development is 4K displays. A 4K display will offer resolution that has four times the pixel density of 1080p HDTVs.

HTS will continue to monitor 2012’s hottest trends, allowing us to bring the latest in technology directly to your home.